Vallam Kali: The famous festival of boat race in Kerala 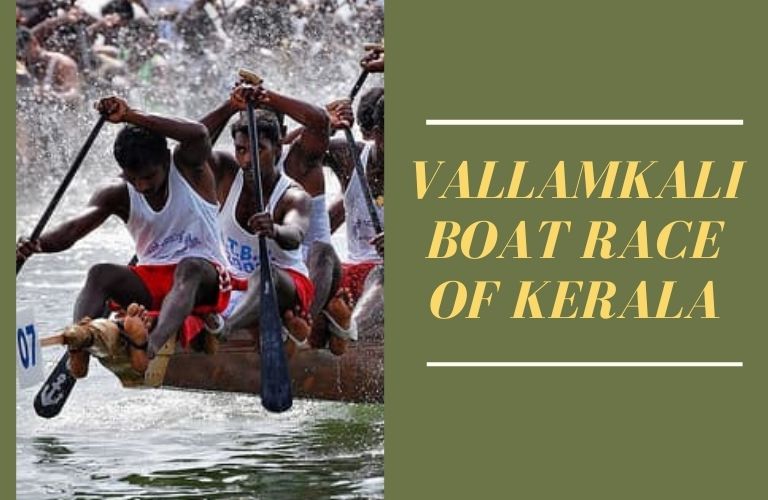 If you happen to be in Kerala in August or September, it would be well worth your time to visit some of the places of snake boat races. These are genuinely festive celebrations that consequently end up becoming cherished memories year after year. Vallam Kali, or boat race, is the famous festival of boat race in Kerala. The state is often associated with the image of its traditional canoe boat racing. The Onam festival is famous for its snake boat races, summing up to one of its most essential events. ‘Vallam Kali’, is a type of canoe racing that attracts large crowds. Snake-shaped boats compete against one another while singing loudly. The beauty of the Onam festival is indeed the boat races, which take place during the auspicious 10 days of August-September.

The race traces its origin back to the 13th-century war between the Kingdoms of Chembakassery and Kayamkulam. The king of Chembakassery assigns creating the finest of war boats or ‘chundanvallams’ to attain a naval advantage. Accordingly, each vessel comprises approximately 100 oarsmen who row in unison and compete in the seas to the melody of ‘Vanchipattu,’ Kerala’s traditional boat songs. In Kerala, the snake boat races are the Olympics of water sports! In addition, it’s a breathtaking sight to witness! The picturesque backwaters become racecourses for this one-of-a-kind athletic event which is an important element of Kerala’s cultural environment and tourism plan throughout the years. The art and craft of sculpturing a Chundanvallam that is at least 8 centuries old are among the prime traditions in Kerala today.

The boat is composed of Anjali wood, which is harvested and delivered to the construction site. On this auspicious day, the construction of the snake boats must commence. The procedures are based on the Vedas’ instructions for making boats. The Vallam Kali takes place during the harvest festival of Onam, which falls in August and September.

In Kerala, there are over 100 boat races, the most notable of which is the Nehru Trophy Vallamkali, which takes place in the backwaters of Alappuzha. If one takes a walk along the sides of the canals and backwaters in Alappuzha several days before the race, he will see activities such as fine-tuning, and maintenance of boats, particularly the majestic chundan vallom (snake boat); oarsmen practicing as a team; teams eating together in between trial runs and discussing the necessary race strategies.

People come from all over the world to observe this unusual water sport in Punnamada Lake. The waters are alive with races of all sizes, from gigantic snake boats to little rural rafts, all racing towards the finish line. We have listed below some of the most famous snake boat races in Kerala.

The Aranmula boat race or Aranmula Uthrutathi Vallamkali is the most ancient of all the festivals of boat races in Kerala. Aranmula snake boat race is held in the Pamba river of Pathanamthitta during the month of Chingam. Legend says that a brahmin promised to deliver all the required items for the thiruvona sadya for the Aranmurala Parthasarathy temple Thiruvonam feast. This boat comes under attack on the way to the temple, but the snake boats of the king will come to its rescue. Therefore, The snake boat race of Aranmula remembers this day of bravery.

Specifically, Palliyodams snake boats used in this event are said to be designed by Lord Krishna himself. He is arrival on these shores in a raft of six bamboos gives the village its name, Aranmula (Six Bamboos). The race begins with magnificent pageantry of the snake boats taking part in the race. The preliminary rounds of competing snake boats occurs next, leading up to the ultimate confrontation. The Vallam kali takes place over a distance of 40 km from the hills down the plains. The boats are decorated with colourful silks, umbrellas and other atonements. The participants sing traditional boat songs or vanchippattu in rhythm with the splashing of water and heaving of oars.

The race takes place on Punnamada backwaters in the state of Alappuzha on the second Saturday of August every year. Without doubt, the most famous of all Kerala snake boat races, is the Nehru trophy vallam kali which is the popular “water olympics”. It is falls every year on the second Saturday in August and attracts a large crowd. People come out in droves to see nearly 100-foot-long boats race against one another while listening to ancient boat music. The race takes place at Punnamada Lake, where the competitors line up to compete.

The explanation behind the name of this water regatta dates back to Pandit Jawaharlal Nehru’s visit to Kerala. Named after the late prime minister of India, the Nehru trophy was christened in 1952 when Jawaharlal Nehru visited Kerala. He got so overwhelmed by the snake boat race that he awarded a rolling trophy to the event in his name. He was so enthralled by the sight of the gorgeous snake boats that he ignored his security cover and jumped onto one of them himself. Later in the year, he would contribute a silver trophy in the shape of a snake boat as a token of his appreciation for his time there.

Consequently, The neighbourhood comes alive with traditional water processions and gorgeous water floats throughout this season. The waters are under the hands of professional oarsmen who put on a display that no one will forget, from giant chundan valloms (snake boats) to modest country rafts. It’s a form of art in and of itself.

The Subrahmanya temple in Harippad, Karthikapally taluk, Alappuzha district, is well-known. The annual Payippad boat race on the Payippad River celebrates the narrative surrounding the idol’s placement at the Subrahmanya Swamy shrine. Following the Nehru Trophy vallam kali, it attracts the most snake boats.
The spectacular sight of racing snake boats battling it out for first place is thrilling to behold.

The President’s Trophy Boat Race is one of the most stunning boating events of Kerala. The president’s trophy is held on the Ashtamudi lake of Kollam city on November 1 every year. The President of India is the annual guest of honour. He gives away the trophy and prize money of 10 lakhs to the winners.

There is a different category of vallam kali, mainly chundanvallam, veppu vallam and iruttukuthi vallam. They all differ in their size and method of rowing. The track is of a distance of 1250m starting from the thevally palace and ending at the houseboat terminal. Hence, observing this water regatta in its entirety will undoubtedly be a visual and auditory feast. It’s a beautiful sight to see oarsmen striking their oars in synchronisation to the high-pitched shouts of boat songs. Thousands of people line the lake’s shores, cheering on the rowers and engaging in the frenzy. Moreover, the president’s boat race is a significant part of the Champions boat league of Kerala.

Snake Boat races are inextricably linked to Kerala’s identity, and Champakkulam is a name that resounds throughout the state. It is the state’s oldest Snake Boat Race, and it kicks off the boat racing season every year. This event takes place in Champakkulam, a village in the Alappuzha district, on the Pampa River. The festival usually falls in June or July, and it attracts huge people. Consequently, this is the start of the boat racing craze that will thus engulf the state for the following few months.

Every year in and near Allepey, there are four large snake boats and up to 15 minor ones. The races take place during the monsoon season, which runs from June to September. But, the exact dates vary year to year according to to to on the lunar phase. However, the Nehru Trophy Boat Race, which takes place every second Saturday in August, is an exception to this rule. The snake boat races, which take place in the middle of the 10-day harvest festival Onam, are the highlight. Meanwhile, Several other boat races come about along the backwaters of Kottayam, Payippad, and Champakkulam throughout the festival.

The Snake Boat Race is a part of the state for over 400 years. The Champions Boat League tournament has included snake boat racing in Kerala that are not related to religious practices.

The Kerala government hopes to bring Vallam Kali, the famous festival of boat race tournament to a worldwide audience. Starting with the Nehru Trophy and ending with the President’s Trophy Boat Race, the event consists of a series of races staged at various locations in Kerala. The water festival in Kuttanad is unique in that each racing boat has a high number of participants. Thus, making it the only sport in the world with such a large number of people in a single team.

Long training, as well as an innate ability, are the prerequisites for the distinctive style of rowing. Those in charge of steering the boat must have a good awareness of water currents and enhanced observation skills. In addition, a complete comprehension of the various facets of boat racing is also necessary. No other country in the world holds such celebrations, and the Nehru Trophy Boat Race is a sight that everyone should see.

Finally, witnessing the great snake boat races is a once-in-a-lifetime experience that should be on your bucket list this year. ‘God’s own Country’ should be your next holiday destination if you want to see spectacular beaches, peaceful backwaters, thrilling boat races, delectable seafood, and cultural history.