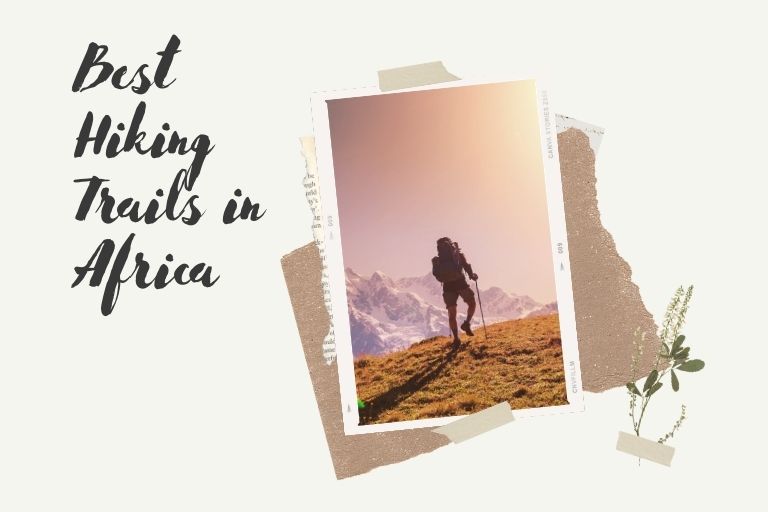 Read the best hiking trails from other continents below.

Here is the list of Top hiking trails across Africa from top travel bloggers around the world.

Suggested by Alissa from Exploring Wild

No list of the world’s best hiking trails is complete without a mention of Kilimanjaro in Tanzania. “Kili,” as the massive dormant volcano is known, is the the tallest mountain in the entire continent of Africa, and one of the few places in the world where hikers can walk to nearly 6000 meters in elevation without technical gear.

There are several trails to the summit of Kilimanjaro, with most taking 5 to 8 days. Longer routes help hikers acclimate to the high altitude, improving their chance of a safe and successful summit. I recommend the Lemosho route for its mix of varied scenery, fewer crowds, and time to acclimate during the ascent. Kilimanjaro is challenging to be sure, but with training and preparation it’s within reach for many people.

Most travelers stage their trek from the town of Moshi, where they meet the required guides and porters who will take them up the mountain. It’s important to pick a reputable company that looks after clients and also treats their porters and guides fairly. Most people arrange their trips in advance, but they can be quite expensive, and if you’re flexible you’ll find better rates once in Tanzania.

Hikes begin with several days of gradually increasing altitude along the slopes of the massive mountain. Nights are spent camping or staying in huts at large group sites. After acclimating, the final summit push is usually completed in the dark so that hikers are rewarded with sunrise from 5,895 meters before returning to camp and beginning the walk down. With its mix of iconic scenery, physical challenge, and cultural richness, a hike up Kilimanjaro will be an experience of a lifetime for those who attempt it.

The Otter Trail in South Africa is one of the most popular and rewarding hiking trails in the World and a must-do for any adventurer visiting South Africa, and promises you an unforgettable experience. Located in the Tsitsikamma National Park on the Garden Route of South Africa, this 5-day hike takes you along a scenic coastline.

What to expect
Foresee to hike a total distance of 45 kilometers over five days. Elevation gains 5,167ft. The Trail is moderate to strenuous, starts at Storms River Mouth, and finishes five days later in Nature Valey.

Reasons to hike the Otter Trail
Besides the picturesque scenery, amazing reefs, and river crossings, experience the lush Forest, flowers, and birdlife.
At nighttime, your accommodation is in wooden Cabins overlooking the ocean. Enjoy evenings around the fire under starry skies, braai some meat and talk about the day’s highlights. Expect to see civet cats at night.

How to get to the Otter Trail?
The best option is to fly to George airport a day before the start of your Trail. You have two choices from the airport, rent a car and drive to Stormsriver, or arrange for a shuttle. By arriving a day earlier, you will be able to explore the area and be more relaxed when you start your hike the next day.

Submitted by Cecilia from Lovicarious

Santo Antao is the second-largest island within the archipelago of Cape Verde. It is a top destination for hikers and trekkers due to the seaside views and dramatic landscapes of towering mountains and maze-like ribeiras (valleys). Although there are a number of worthy hikes to choose from on this island, the Cova to Valle de Paúl trail is undeniably a favorite among hikers. Not only is it challenging with a steep series of switchbacks, but the views are absolutely breathtaking. On a cloudy day, the trail seems to magically descend into a rolling blanket of clouds. On a clear day, this trailhead gives an unimpeded view of the lush valley below and the stretch of ocean leading to the adjacent island of Sao Vicente.

This 6-mile hike can be completed from the bottom up (starting in the Paúl Valley) or from the top-down (starting in Cova).To begin in the valley, take an aluguer (public transportation) to the Ribeira de Paúl where you will find the trailhead.

To begin from the top, take an early morning aluguer from Porto Novo or Cidade das Pombas to Cova de Paúl. The driver will drop you off by the crater where you will have the best view of the hike looking out past Paúl toward Cidade das Pombas and the open ocean. I recommend starting from the top and hiking down for 2 reasons. This downward route is a bit less strenuous allowing you to focus on the views rather than your shortness of breath.  Secondly, there are more dining options in Paul and trust me you will be hungry after this hike! I recommend O Curral in Cha de  João Vaz, a charming café serving traditional Cape Verdean dishes made with ingredients from their own farm.

4. The Golan Trail in Israel

Erez Speiser from Israel by Foot

The Golan Heights are a mountain range in Israel’s northeastern corner, near the border with Syria. Most of its area is an elevated plateau characterized by rolling hills, disturbed from time to time with cone-shaped extinct volcanos.

The area is full of natural, cultural, and historical attractions. The best way to experience is by hiking the 130 kilometers long Golan trail. Most of the path is easy, traversing between the rolling hills of the Golan plateau. Depending on fitness and character, it takes between 5 to 10 days to complete the trial.

Besides the beautiful scenery, the Golan trail is also a historical and cultural journey. Along the trail, you will pass through a variety of communities and settlements such as Druze villages (A Middle Eastern Arabic-speaking small ethnic group, maintaining a unique religion that split from Shiite Islam in the 11th century) and Kibbutz (A unique form of settlement to the land of Israel based on socialist values – equality between people and total economic co-operation.)

There are many archeological and historical sites along the trail. Some are small and not well known, and others are more famous:

Who is Golan trail for?

It is an excellent seven-day trek for hikers looking for a friendly trail without steep climbs and technical difficulties and would like to spice-up their route with history and archeology.

5. Nyiragongo in the Democratic Republic of the Congo

Suggested by De Wet & Jin from Museum of Wander

Virunga National Park in the eastern Democratic Republic of the Congo is not only home to the incredible mountain gorillas, but also perhaps the most incredible overnight hike in Africa.

Nyiragongo (3470 m) is an active volcano, and adventurers will love this once-in-a-lifetime experience. The big draw of climbing Nyiragongo is of course reaching the summit and lay eyes on your reward: the largest lava lake in the world.

The hike is quite strenuous, as the path goes straight up the steep volcano. It takes about seven hours to cover the seven odd kilometres from the starting point to the summit, where you will spend the night.

Starting in the dense forest, the first part of the walk is in lush shade. Here you might hear, or even spot, monkeys and chimpanzees if you’re really lucky. This eventually gives way to the sub alpine zone with trees covered in strange mosses. Before reaching the windswept and bare summit, hikers will go through the otherworldly African Alpine zone with giant Lobelia plants reaching enormous sizes.

Reaching the summit is an unforgettable experience, and the best reward after hours of battling up the volcano. The sight and sound of the bubbling lava, almost like a stormy sea, is something that you’ll never forget.

There are a few very basic shelters on the volcano rim where trekkers will spend the night. Be prepared for a very cold night. Do consider paying for a porter to carry up some coal for you to keep you warm and for boiling water for tea. There are no facilities on the summit other than a long drop toilet and the basic shelters.

All activities inside Virunga National Park are conducted by the national park, so it’s best to book directly with them. A trekking permit costs US$ 300 which include overnight accommodation on the summit, and two park rangers to escort the group to the summit.

Dramatic Mt Sinai in the Sinai Peninsula in Egypt is a famous hiking site and a part of the world-celebrated Sinai trail that has been voted as one of the best treks in the World. Climbing Mount Sinai in Egypt is a once-in-a-lifetime experience.

Spectacular Mount Sinai in Egypt is one of the oldest mountains in the World with some parts that are about 600 million years old. Furthermore, for centuries  Mount Sinai has been known as the Moses Mountain. It is believed to be the Biblical mountain where God spoke to Moses, and where he received the Ten Commandments. Therefore, hundreds and hundreds of years Mount Sinai in Egypt has been an important religious pilgrimage site of followers of all Abrahamic religions. In addition, Sinai’s St Catherine monastery which stands at the foot of the mountain was built on the site where, what was believed to be found, Moses’ Burning Bush. Today, St Catherine’s Monastery in Sinai is a UNESCO World Heritage Site.

But besides that, Mt Sinai is one of the most impressive mountains in the world. So, hiking Mount Sinai in Egypt is one of the top hikes of a lifetime. The standard Mount Sinai hiking route goes from the St Catherine monastery, which stands at 1.600 m (5.249 ft) above sea level up to Mount Sinai summit which is at 2.285 m (7497 ft).  Mt Sinai summit can be reached by two hiking paths starting in front of the St Catherine monastery: the ‘Camel Path’ and ‘Steps of Repentance’. The Camel Path is a 7 km (4.3 mi) long twisting path with many curves and bends that take 3 hours to the summit. The Repentance Path goes via uneven and steep 3.750 steps that take about 2 hours to the summit.

The most popular Mt Sinai treks start in the late evening, use hiking at night with the aim of reaching the top of Mt Sinai before sunrise to be able to witness a spectacular sunrise over the Dead Sea from the mountain top. Mt Sinai hiking tours are always guided by local Jebeliya Bedouins who call Mt Sinai their home and who know the mountain the best.

Blessed are the curious, for they shall have adve

A summer morning cruising through the beautiful Ve