Top 15 Places to Visit in Kodungallur 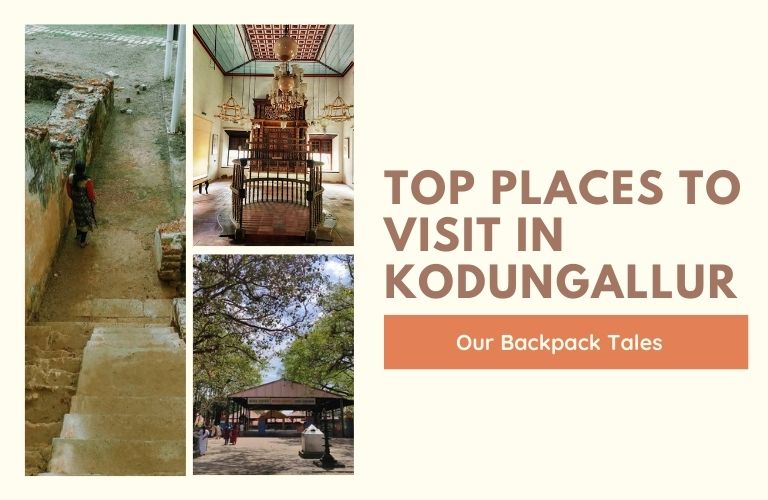 The city of Kodungallur, or Cranganore as it was called by the British, is a fascinating city located in the Thrissur district of the state of Kerala. Cranganore has a rich history of trade in ancient times and was often known as the ‘gateway to India.’ The city was also known as Shinkli or Muchiri in ancient times and was a prosperous port located in the mouth way of the river Periyar. The city was also known in many names, such as Vanchi, Mussiripatanam, and Kotalingapuram, with the most famous names being Muziris and Mahodayapuram. Here are some of the top places to visit in Kodungallur.

Kodungallur is most famous for its temple, The Sree Kurumba Bhagavathy temple, Which is dedicated to the goddess Bhadrakali, or Parashakthi. One of the oldest temples in Kerala and home to ancient sculptures and murals, the Kodungallur temple is considered to be the head of all 64 bhadrakali temples in Kerala. Ancient tales of temple formation consider Parashurama as the founder of the goddess kali shrine in the temple. The five chakras of the temple were installed by Adi Shankaracharya. It is widely believed that Kannaki, the central character in the Tamil epic Silapathikaram, attained moksha in this temple after ravaging the city of Madhura.

Kodungallur temple is most famous for its festival, the Kodungallur Bharani. The festival is celebrated for seven days in the Malayalam month of Kumbham. Rituals like ‘Kozhikkalu moodal,’ ‘Kavu theendal’ etc., are part of the festival. Oracles or velichapadu are known for cursing abusive words at the goddess, which is believed to please her.

Kodungallur temple is located in NH17 at the heart of the city. The Kodungallur Shornur state highway 22 begins at the bhagavathy temple. The nearest railway stations are Thrissur and Chalakudy. This is one of the top places to visit in kodungallur.

The oldest mosque in the Indian Subcontinent dating back to 629 BCE, the Cheraman mosque is one of the top attractions of Cranganore. It is rumored to have been built by Malik Dinar, a Persian disciple of Prophet Muhammad, to spread the message of Islam in Kerala. The mosque was patronized by Cheraman Perumal or a Chera king who became a disciple of Prophet Muhammad after meeting him in Arabia. Major rituals include Vidyarambham or the beginning of knowledge, appointments of priests, etc. The masjid is located in the Paravur – Kodungallur route on the old national highway 66. This is a top place to visit in kodungallur.

If a casual evening at the beach is what you desire, the Azhikodu beach is the perfect place for you. It is the largest beach in the Thrissur district and is at a distance of 8 kms from Kodungallur. The beach features open-air auditoriums, walkways, a play area for children, food courts, casuarinas forest by Kerala forest department, etc.

The Marthoma church is one of the oldest churches in the Indian Subcontinent, founded by St. Thomas in AD 52. St. Thomas arrived at Muziris in AD52 and founded Ezharapallikal or the seven and a half shrines, thereby evangelizing Kerala and Tamil Nadu. The seven churches are located in Kollam, Maliyankara or Muziris, Kottaykal, Kokkamangalam, Niranam, Nilaykkal, and Palayoor, with the Muziris or Maliyankara being the first among them.

The church is located near to Azhikodu jetty near to Kodungallur. This is one of the major attractions in Kodungallur.

Kottapuram fort or Cranganore fort was built by the Portuguese in 1523 and had fragments of reminiscence of the flourishing yesteryears of the Muziris port. It was captured and destroyed by the Dutch in 1663. The location of the fort in a strategic location in the river Periyar meant that vessels that traveled to the interior of Malabar could easily be controlled. The fort has remains of the church and residential buildings in its premises. The court was significant in the power struggle between the Zamorins of Calicut and the rulers of Kochi. This makes it a must-visit place in Kodungallur.

The fort is located at a distance of 37 km from Kochi and 27 km from the Aluva railway station.

Vadanappally beach is located in the coastal town of Vadanappallly, in the Thrissur district in Kerala. It is near to the ancient trade center of Kandassankadavu, with the national highway 66passing straight through the heart of the town. The Snehatheeram tourist beach is also nearby at a distance of 4 kms. The beach is lush with coral reefs and beautiful palm trees, creating a healthy, cool green cover. It is also linked with backwaters on the other side and a serene location to spend some time with family.

The beach is located 17km from the Guruvayur railway station. It is easily accessible via the NH66.

The Muziris project was started after remains of the ancient port city of Muziris were unearthed in the town of Pattanam, Kerala. The findings helped rediscover the story of the greatest trading center in the east, with the seaport trading everything from spices to precious stones with the ancient civilizations of Romans, Greeks, and the rest of the world. The Muziris lakeshore park in Kottapuram takes you back to the prime days of this ancient port city that saw the rise and fall of cultures and civilizations. The park is located with a serene lakeside view in Kottapuram, Kerala. This is one of the main places to visit in Kodungallur in the evenings.

Athirapilly waterfalls, also known as the Niagara of South India are the largest waterfall in Kerala with a height of 80 ft. It is located in the Chalakkudy panchayat of Thrissur district of Kerala, in the Chalakkudy River, which originates from the Western Ghats. The waterfall is adjacent to the biodiversity area of Chalakuddy, home to a large number of exotic species, including Bengal tiger, Asiatic elephant, Lion-tailed macaque, Sambar, etc. Vazhachal forest is the only area where all four species of hornbills found in Kerala are seen living together. The Vazhachal falls, or the Charpa falls, are some of the places to visit near Athirapally waterfalls. The forests of Sholayar, Athirappilly, Vazhachal are rumored to be the habitat of an undiscovered species of the cat family, known in the local legends as ‘Pogayan.’

Athirappilly is easily accessible from Angamali and Chalakudy, and the nearest railway station is Chalakudy. This is one of the top places to visit in Kodungallur even though it takes a day to visit and come back.

The Palium palace is the traditional home of the paliyathu acchans, the ministers of the royal family of Kochi. The Palium palace was renovated by the Dutch in appreciation of the minister’s services, and hence the architecture of the palace is a mix of Dutch and Kerala styles. The evolutionary stages of the Cochin kingdom amidst the frequent attacks of the Zamorins, the Mysore kingdom, and the Europeans formulate the theme of the museum. The visiting hours are from 10:00 AM to 05:00 PM.

The nearest railway station is Aluva, and the nearest airport is Cochin International Airport. This is one of the top places to visit in Kodungallur

Abdul Rahman Sahib was a freedom fighter of Kerala and the head of salt Satyagraha in Kerala. His actions during the freedom struggle earned him the name ‘Keralasimham’ or the lion of Kerala. His house is built in the traditional Kerala style of nalukettu, and now as a museum showcases his achievements as a freedom fighter and a social reformer. The museum is close to Marthoma Church and is at a distance of 7 kms from the Cheraman Juma masjid.

The hexagon-shaped Pallipuram fort was built by the Portuguese in 1503. The remains of this fort now feature an elevated area of five feet and a small cellar running adjacent to a passage from north to south. It was used by the Portuguese as a base to check the ships and also to use gunpowder. The fort is located in the North Paravur Munambam road.

An important trade center in the medieval era, the Kottapuram market was used by the natives and the Europeans in a similar fashion. A walk through the market revives its golden past and

It is situated very close to national highway 17 of Thrissur city. This is one of the major attractions in Kodungallur.

Cheraman parambu is the seat of Cheraman perumals, the Kings of chera dynasty. Various potsherds, copper and iron implements, and Sivalingas were excavated in 1936. The potsherds were found to be Celadon ware, a specific style of the Ming dynasty of china of the 12 century AD.

Harmony Park features the cemeteries of Jewish settlements of the Muziris region, a sign of religious tolerance of the cochin empire. It is one of the unique places wherein the four religions of Hinduism, Islam, Christianity, and Judaism coexist in harmony with each other. The park is a part of the Muziris project, located close to the Chendamangalam synagogue. The synagogue and nearby places are top places to visit in Kodungallur.

Gothuruthu means place of cattle, and it was a grazing land owned by the Paliyath ministers. The area now features state the art Chavittunadakam center, a traditional art form associated with Christianity. The art form owes its origins to the Portuguese and involves the artists stamping hard on the wooden stage accompanied with music and song verses. It is performed annually in January.